Upon seeing the launch of a modern day rocket, such as the Ariane 5 or the Soyuz, one might wonder how tremendously difficult it is to build a machine that can bring a 4 ton artificial satellite to an orbit, hundreds of kilometers above the sky. As mentioned  in the rocket propulsion series at techforspace.com, rocket propulsion is unquestionably a complex discipline, not to mention the accuracy required to attitude and orbit control systems.

But for the mission lifetime of a satellite, getting to orbit is only the beginning. Once in space, it has to carry out a mission that can even last for years in a very hostile environment. And, above all, there is no margin for error. Maintenance and repair of orbiting spacecraft is nearly impossible: it has only been done for space stations and for the Hubble telescope. 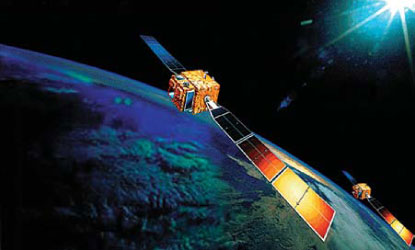 That is the first constraint in spacecraft design: total self-sufficiency. A satellite will have to carry out a mission without any maintenance or resupply. Any catastrophic failure must be accounted for and prevented or mitigated.

Designers usually need to consider the whole satellite from a systems point of view, seeing how all subsystems interact with each other, since a small change in one of the components (be it in mass, electric power or volume) can severely alter and hinder the operation of other components.

Satellite design appears even more challenging if we consider that space is a very hostile environment. For example, temperatures can vary between -100ºC and +100ºC in each orbit, so a thermal control system must be designed to keep components at a safe temperature.

At low orbit altitudes, there is still a thin atmosphere that can cause drag. This drag will slow down spacecraft and make them lose altitude. For instance, the International Space Station loses 2 km of altitude each month and needs to be reboosted regularly.

Being above most of the atmosphere also means that satellites are much less protected against many hazards. Radiation is stronger in space and can damage sensitive electronics and optical instruments. Spatial debris and micrometeoroids can hit a spacecraft with relative velocities of a kilometer per second. In the vacuum of space, materials behave differently and can sublimate or become brittle. The Earth’s magnetic fields can hamper communications, and solar flares (eruptions of protons and electrons coming from eruptions in the Sun’s surface) can permanently damage electronics.

These conditions cannot be fully reproduced in experimental setups on Earth. Most of the available information was gathered in experimental missions. If the success of a mission has to be ensured, high margins have to be taken – always considering that extra mass is notably expensive.

In conclusion, spacecraft designers have no room for error, limited mass and space and have to deal with a very hostile environment of which not much is known. Not of speak of manned missions, requiring and even stricter environmental control and handling of human needs.

This is the reason why numerous scientific missions are conducted. For instance the international space station is the perfect testbed for new technologies that could allow sustained human space travel in the future.